I have been an inquisitive and industrious student this semester, engaged in Baroque music studies with musicologist Marc Vanscheewijck and Baroque flute studies with Kim Pineda. My studies are reinforced while exploring 17-18C art in museums and churches throughout Italy, and while attending events featuring music and rhetoric of the Baroque era. 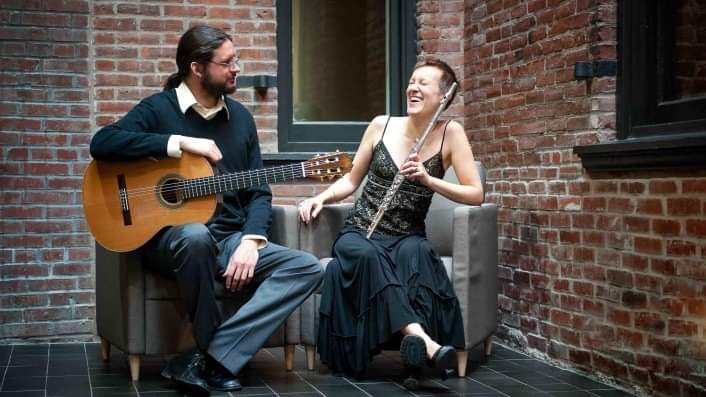 Anyone who has been paying attention to the world of contemporary chamber music during the past twenty years will recognize the names of flutist Molly Barth and guitarist Dieter Hennings — together known as Duo Damiana.

On Sunday, June 5 at the Cleveland Institute of Music’s Kulas Hall, these extraordinary musicians presented a program of 21st-century music that bore witness to their irreproachable technical skills and their mesmerizing palette of colors.

From the opening rhythmic taps on the guitar that are gradually joined by beat-box accents in the flute, which then give way to a sequence of evolving rhythms, the players held the audience in rapt attention. The second Haiku is defined by a series of short motifs that become the arc of a conversation between the instruments, while the seconds-long third Haiku continues the conversation. In the fourth, guitar chords underpin lush, lyrical melodies in the flute, and the concluding poem is a dance. Keeping true to its title, Five Haiku has a lot to say in a short period of time, and Duo Damiana interpreted it with poise.

Written for and premiered by the Duo, John Liberatore’s The Soughing Wind (2015) is based on a three-line poem by William Carlos Williams. Written in a five-movement arc, the work opens with harmonics in the guitar that support a long, serene flute line, while movement two is full of catchy, bouncing rhythms. Barth and Hennings were at their most animated during the playful exchanges of short, whimsical musical material in the third. The soft, meditative fifth can only be fully appreciated in live performance. Here the composer directs the flutist to play as quietly as possible. And Barth’s dynamic control was astonishing as she played the nearly inaudible ending all while maintaining a presence in her sound.

The performance also included the world premiere of Herbert Vazquez’s El Jardin de los destellos(The garden of the delicate sparkles). Dedicated to the Duo, the composer writes: “I have always had a feeling of intimacy and introspection when walking through a Japanese garden. To me Japanese gardens possess a delicate expression of both the human existence and the passing of time.”

Vazquez’s music is so vivid that you can feel the fireflies around you. Accented snaps and thumps from the guitar transition into fast, interlocking technical passages and complex rhythms. The work is like a cabinet of curiosities for the ears — one that Barth and Hennings turned into a sonic heaven, setting the stage for David Lang’s beautifully melodic Gift (2018).

Shafer Mahoney’s Shining River (2007) is inspired by the American naturalist John Muir, and the music paints a picture that is at times placid and at times rippling. Here Barth was at her most lyrical as her inner-singer came forth.

Tōru Takemitsu’s Toward the Sea was the perfect concert closer. Written in 1981 — the only work on the program not from the 21st century — it still sounds thoroughly modern. Takemitsu writes in his composer note that “music is like a river or a sea. As many different currents create those oceans, so does music deepen our lives with constantly changing awareness.”

Commissioned by Greenpeace for the Save the Whales campaign, the piece is written in three movements whose titles reflect Herman Melville’s most famous novel. “The Night” is calm, “Cape Cod” soft and meditative, and “Moby Dick” picturesque with whales splashing in the ocean. Throughout Barth and Hennings were astute interpreters of Takemitsu’s score.

In reflecting on the past year, during a pandemic, I kept VERY busy:

In May 2020 I was promoted to the rank of Associate Professor of Flute.

I recorded and produced a solo flute video production: “Ineffable” which is available on the Vanderbilt and Molly Barth YouTube Channels

Bang On A Can Marathon, commissioned work of Kristina Wolfe

I was a guest clinician as follows:

I was involved in the premieres of the following:

Kristina Wolfe, Listening to the Wind, for solo amplified flute

Michael Rose, To the Four Winds, for flute, oboe, bassoon and horn

I co-wrote an article for the The New York Flute Club, Fall 2020 issue, “Density 21.5, a performer’s perspective”

I was a 2020 Music Panelist for the Herb Alpert Award in the Arts, Santa Monica CA.
I was a NAACP ACT-SO High School Contemporary Instrumental Competition Judge (online)

Contemporary Music Ensemble, which I co-directed, offered the inaugural concert at the National Museum of African American Music

Wherein Bang on a Can brings you a bunch of über-cool artists and pieces we’ve programmed over the past year for further consumption. In previous times we’d have packed up and hauled it all to Deutschland, but now we all can enjoy the Festival for Time Issues in, well, real time, all around the world.

“I love the way Bang on a Can has been dealing with the challenges of this pandemic, taking initiative and responsibility for their community. The marathon format is filled with new purpose and life. Presented live online, it reminds us of the irreplaceability of live art in a soothing way. This crisis situation can be an opportunity to team up and make something transatlantic happen that would not happen otherwise – connecting music lovers and communities from all around the world.”  –   Berno Odo Polzer, Artistic Director of Maerz Musik Festival

To find out more about the wonderful Maerz Musik Festival for Time Issues, their website has all you need to know, in English und German natürlich,

[Set times are approximate and subject to change.]

Daniel Bernard Roumain Why Did They Kill Sandra Bland? performed by Arlen Hlusko

Kristina Wolfe Listening to the Wind performed by Molly Barth

What is especially exciting about this particular Marathon is that this show is all world premieres and all new commissions.
I will premiere “Listening to the Wind” by Kristina Wolfe, at 2:20pm EST.
Bang on a Can Marathon Live Online
February 21, 2021, 1-5pm EST
February Marathon 2021 — Bang on a Can Live
Facebook event:
https://fb.me/e/OM9uWpqb

Flutist Molly Barth brings music and poetry to life with stunning videos filmed at some of Nashville’s most iconic locations.

Mark your calendars! I am playing the ORIGINAL 1936 manuscript of Density 21.5 (very different from the piece you all know!) on a beautiful BURKART PLATINUM FLUTE for this FREE online performance/discussion on November 5 at 7:30pm Eastern Time! This original version of the piece has not been performed since Georges Barrère performed it over 70 years ago! 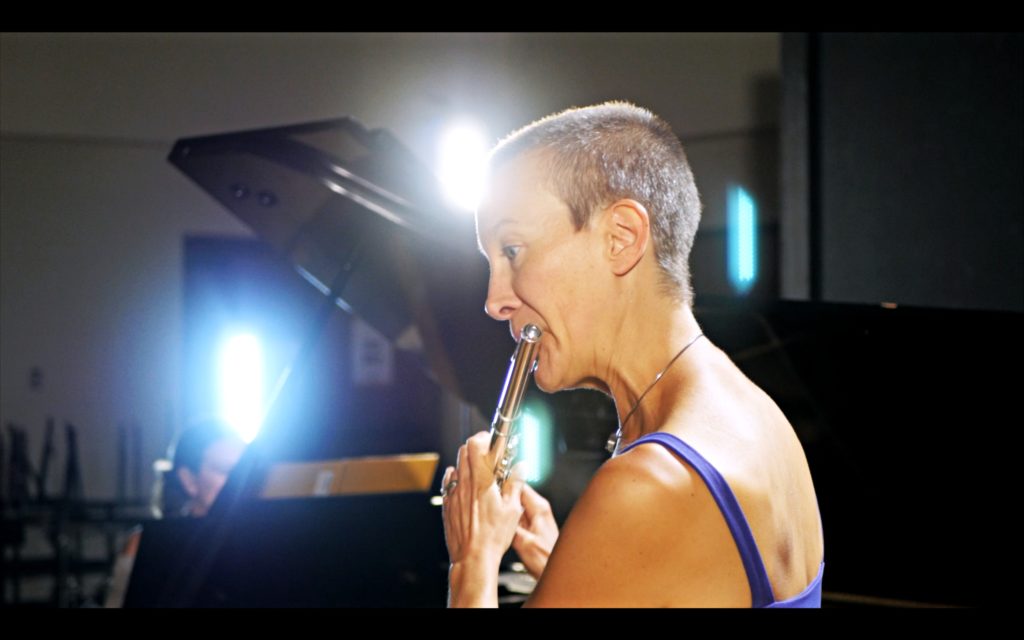 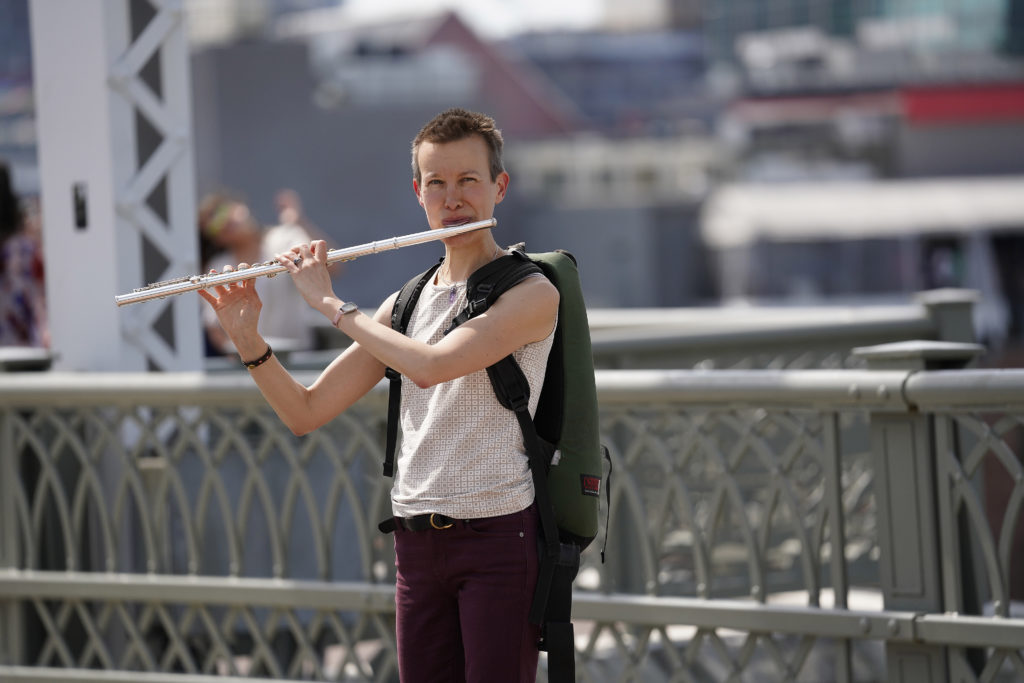