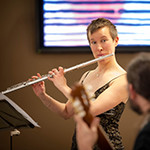 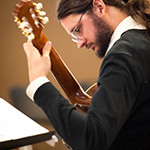 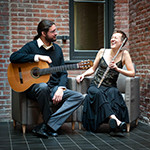 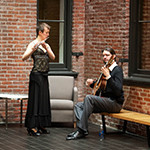 Damiana: Latin Meaning: One who tames; subdues. French and Greek Meaning: Untamed. People with this name have a deep inner desire to create and express themselves, often in public speaking, acting, writing or singing. They also yearn to have beauty around them in their home and work environment. People with this name are excellent at analyzing, understanding, and learning. They tend to be mystics, philosophers, scholars, and teachers.

Founded by guitarist Dieter Hennings and flutist Molly Barth, Duo Damiana is focused on broadening the cutting-edge body of repertoire for flute and guitar.  Duo Damiana has toured through the United States and México and has presented workshops at prestigious institutions including the Oberlin College-Conservatory, Indiana University Jacobs School of Music and the Cincinnati Conservatory of Music. They have mentored and performed at the Oregon Bach Festival Composers Symposium and at the National Flute Association Convention. Duo Damiana recently released their debut CD “Castillos de Viento” on the Innova label.

Molly Barth is constantly in motion. This Grammy Award-winning flutist, professor and clinician moves effortlessly from concert hall to teaching studio to rehearsal room to orchestral section. Molly needs fuel for this fire.

Molly is fueled by visceral communication with listeners. The halls may be large or small, the music may be old or new, but the performances are always concentrated, intense.

Molly is fueled by the smell of wet ink and spark of chamber music. Molly has premiered hundreds of pieces, finding the creation of new music uplifting and miraculous. Molly has toured the world, recorded a dozen albums, and—with Eighth Blackbird—won a Grammy Award. Molly is a co-founder of the Zohn Collective, a group of curious musicians who share a love of risk and exploration.

Molly is fueled by her work as a teacher. Molly is Associate Flute Professor at the Blair School of Music, Vanderbilt University, and Molly guides her students to become comprehensive flutists. Molly took her inspiration primarily from her stellar teachers at Oberlin, the Cincinnati Conservatory, and Northwestern.

Molly is fueled by her desire to document her adventures as a performer. You can hear Molly’s blend of control and ferocity on these featured albums: Vento Appassionato, digging into 20th century solo flute repertoire; Thorn, focusing on the chamber music of David Lang; and Castillos de Viento, performing intimate music with guitar.

Read more about MOLLY BARTH at her about me section